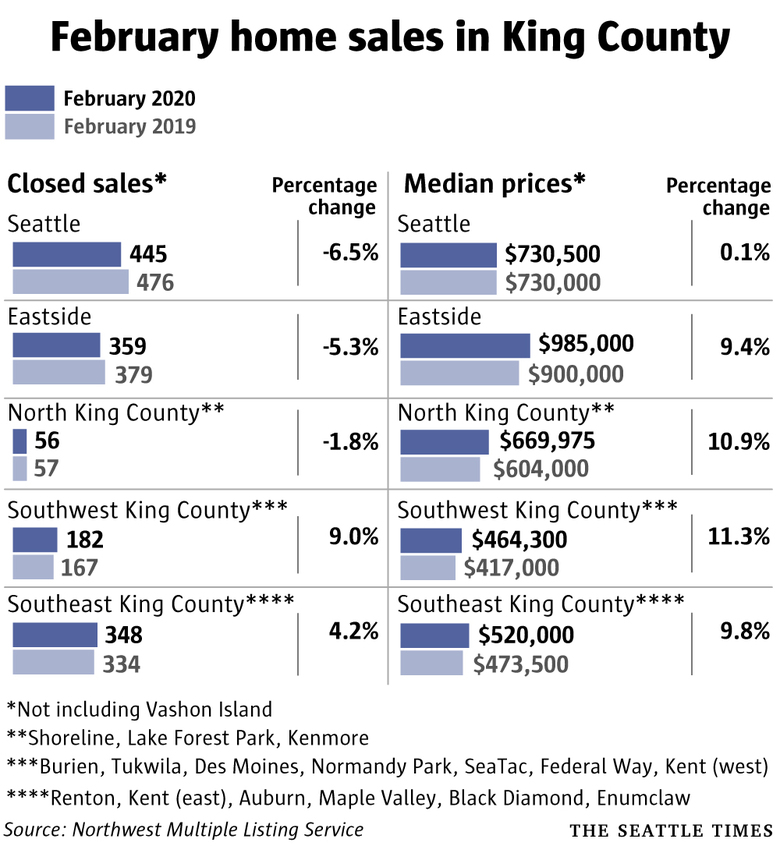 The condo a quarter-mile away from the Life Care Center of Kirkland — the long-term care facility at the epicenter of the U.S. novel coronavirus outbreak — hit the market at $365,000 last week, one day after the first resident of the nearby facility died of the flulike illness.

By Monday, roughly 34 groups of home shoppers and looky-loos had toured the property, not one expressing concern about the viral disease, according to the listing agent.

The condo sold five days after it was listed, with the winning offer of nearly $400,000 waiving all contingencies.

Even as concern over the rapid spread of the novel coronavirus mounts, the most recent data on area home sales from the Northwest Multiple Listing Service (NWMLS) shows the market for Seattle-area residential realty remains hot.

It’s too early to tell just what the impact of the novel coronavirus will be in the coming weeks, but all else being equal, low inventory and price increases are expected to continue into the spring, brokers said.

An emergency interest-rate cut Tuesday — the first time the Federal Reserve has used emergency powers since the depths of the 2008 financial crisis — could add further fuel to property markets around Puget Sound, brokers said.

“Our agents aren’t yet seeing any impact on open house attendance due to the COVID-19 outbreak,” said Mike Grady, president and COO of Coldwell Banker Bain in Bellevue, in a statement. “We continue to be bullish on the Puget Sound economy and real estate market.”

In February, median home prices in King County spiked 7% over the previous month, to $675,000, representing a 3% gain year-over-year. There were also more new listings in King County, 2,271, than any time since September.

Meanwhile, inventory plunged even lower than January’s already-tight market, by one metric. There were 40% fewer homes on the market in King County in February than there were in January, the NWMLS data shows.

But months of inventory — a measure of how long it would take to sell all the homes currently on the market — stayed constant at 1.2 between January and February, indicating that homes weren’t moving quite at January’s greased-lightning pace.

Prices rose more slowly in Seattle than anywhere else in King County, to $730,500, a less-than-1% bump over this time last year. Elsewhere in the county, from the tonier neighborhoods of the Eastside to less-expensive parts of Southwest King, price growth saw an increase of roughly 10% compared to last year.

Elsewhere in Puget Sound, home prices continued a meteoric rise, especially in Kitsap County, where they rose by an eyeball-popping 18% year-over-year. Growth in Pierce and Snohomish counties hovered around 10% compared to last year, with median prices hitting $395,000 and $515,000, respectively.

Related Articles
National Housing Market Matthew Gardner’s Top 10 Predictions for 2022 Matthew Gardner’s Top 10 Predictions for 2022 by Matthew Gardner 1. Prices will continue to rise There are some who believe that U.S. home prices will drop in the coming year given last year’s extremely rapid pace of growth, but I disagree. I don’t expect prices to fall; however, the pace of appreciation will slow […]
Local Market Update Q4 2021 Western Washington Real Estate Market Update – by Matthew Gardner The following analysis of the Western Washington real estate market is provided by Windermere Real Estate Chief Economist Matthew Gardner. We hope that this information may assist you with making better-informed real estate decisions. For further information about the housing market in your area, please don’t hesitate to contact your Windermere Real Estate agent.   […]
National Housing Market Monday with Matthew: Is a Housing Bubble on the Horizon? by Matthew Gardner Hello there! I’m Windermere Real Estate’s Chief Economist, Matthew Gardner, and welcome to a rather special episode of Mondays with Matthew. Why special? Well, regular viewers of my videos will know that I generally take this opportunity to give you an update on the housing related numbers that came out in the […]